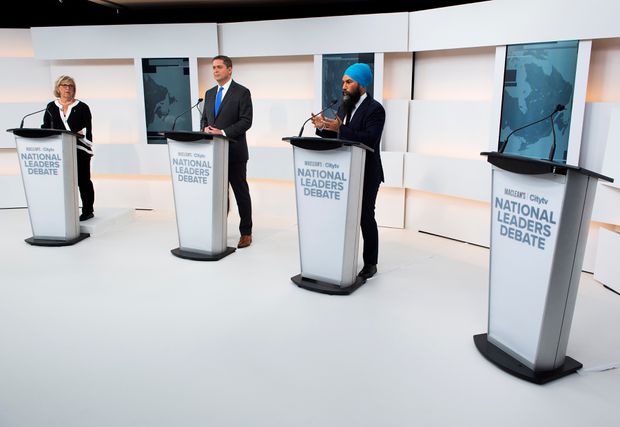 Printed and online in the Globe and Mail on Friday, September 13, 2019

I had no idea what to expect of last night’s Maclean’s/City TV leaders’ debate, other than that, of course, Prime Minister Justin Trudeau wouldn’t be participating. He was in Edmonton in front of what appeared to be an enthusiastic gathering of Liberal supporters, which I didn’t think existed any more in Alberta.

But the Prime Minister’s lack of presence was certainly felt. The organizers had set a podium out for him to signify that he was invited and chose not to come. Or maybe they did it for the same reason children leave out milk and cookies for Santa: an act of absolute faith that he will show up, eventually, if you just believe!

Either way, that turned out to be the best thought-out physical aspect of the entire debate. Other than that, it seemed like they had convinced the producers of The Handmaid’s Tale to let them use a leftover “examination room” set and then, to add some excitement, threw in some grey-toned maps of Canada on the walls behind. That or they were Rorschach inkblot tests, which, granted, would have been easier to decipher than most of the answers the leaders were providing.

There was no live audience in place, which always baffles me about Canadian leaders’ debates, because the energy that a live audience provides would make every participant more entertaining to watch, and would offer loud, immediate feedback when a given answer isn’t acceptable. Besides, whoever becomes the prime minister should be able to face large, live crowds, shouldn’t they? I mean, who else is voting in this election? Robots? Grow up.

The evening was moderated by Maclean’s columnist Paul Wells, who led the evening off with a joke about this debate having “25 per cent fewer leaders,” pausing where he thought laughter from a live audience might have come. Then he launched into a diatribe about why the debate would go on without Mr. Trudeau: “In Canada, we elect Parliaments, not Presidents … and the right to ask questions is never bestowed by some authority, it belongs to everybody.” This nicely set the evening’s tone for statements that didn’t make sense.

Mr. Wells is knowledgeable on Canadian politics, and I believe he tried as hard as he could to maintain order. But what he maintained was the aura of a substitute teacher whose students weren’t going to pay attention because they didn’t acknowledge the “authority” he had bestowed upon himself. Who would I have had moderate instead? Well, obviously I know a guy who moderates debates more than just about anyone else in Canada, and is an actual comedian. But I also would have loved to see what recently departed U.K. Parliament speaker John Bercow would have brought to the role. His calls of “Orrrrder! Orrrrrr-der!” and “Be a good boy, young man!” alone would have made this debate more worth watching.

The debate participants of course were the other federal party leaders: Elizabeth May, Andrew Scheer and Jagmeet Singh appeared on screen, in that order, from left to right. Which is weird, obviously. I would have placed Mr. Scheer on the far right. It did, however, lead to some entertaining moments when Mr. Singh and Ms. May were trying to yell over Mr. Scheer’s head – a formidable task, since he appears to be 8 or 9 feet tall – and he looked straight ahead at the screen like he would rather be anywhere else. Even a Liberal campaign rally in Edmonton.

The debate kicked off with questions about the economy which Ms. May, the most experienced of the three in national televised debates (Mr. Scheer and Mr. Singh had a combined experience of zero to that point), started answering by giving a “shoutout to my fellow Rotarians.” For this reason alone, I was happy Elizabeth May was there. Rotarians simply don’t get enough national shout-outs. But in fairness, Rotary group members had been tapped by City TV as the go-to group for early in-debate analysis, which I feel could have been equally as observant but far more entertaining if they’d gone with Statler and Waldorf from The Muppetsinstead.

When the economy questions turned to Mr. Scheer, he looked straight down the barrel of the camera and became, for all intents and purposes, a very tall Stephen Harper.

Then it was Mr. Singh’s turn, and he immediately set the tone that he would follow for the rest of the debate: personal anecdotes of people he had met, combined with attacks on both the absent Mr. Trudeau and the present Mr. Scheer for their preferential treatment of the wealthy, all while interrupting other speakers and then telling them not to interrupt him while he was interrupting them.

That was seven minutes in, and if the Prime Minister had tuned in at that point, he probably high-fived whoever had convinced him not to participate in this thing (quite possibly it was a self-high-five), before continuing to drive his campaign bus himself, so it didn’t run into a plane, too.

But then Andrew Scheer did something interesting – yes, really – when he looked to his left, looked to his right, and said: “I think we can all agree Justin Trudeau is afraid of his record, and that’s why he’s not here tonight.” The other leaders shared this sentiment with Mr. Scheer, and with that he had done something his Conservative predecessor had never done in any national debate: he had gotten consensus from other parties on something, even if it wasn’t really a thing.

That was the most telling thing in this whole debate. Mr. Trudeau wasn’t legally obligated to participate in this (or he was and he got whoever the Attorney General is now to get him out of it). He may well have done the right thing by skipping it, as far as his diehard followers are concerned. But his diehard followers weren’t watching. Those tuning in were undecided voters who watched two hours of three people (four, if you count the substitute teacher) alluding to the PM’s perceived failures without him being there to defend himself.

Whether or not he considered this a “real” debate, those who watched did. And while I’m not sure how many Canadians actually did watch, I do know it was more than the Maclean’s employees (whose viewing was likely made mandatory by management) and Elizabeth May’s fellow Rotarians, who, again, I’m very glad got a shout-out.