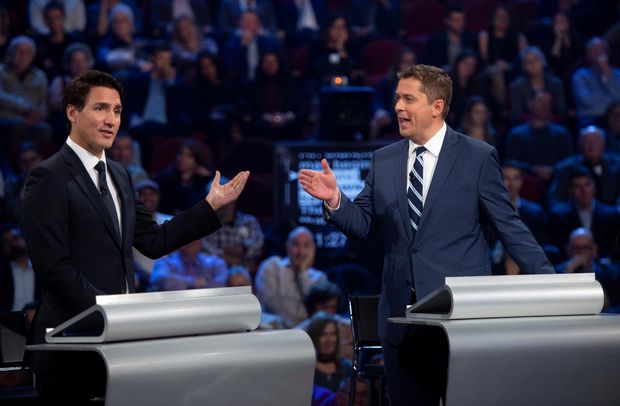 admin
Add comment
5 min read
STEVE PATTERSON
SPECIAL TO THE GLOBE AND MAIL
Printed and online in the Globe and Mail on Tuesday, October 8, 2019
Steve Patterson is a veteran standup comedian and host of The Debaters on CBC Radio One and the touring program The Debaters Live.

It’s fitting that last night’s federal leaders’ debate took place in the Canadian Museum of History, because at this point in history, it will go down as the most ridiculous debate that our democracy has ever staged. And I say this having moderated more than 700 debates that were intentionally ridiculous.

If you tuned in, it was tough not to tune out. So here is what you “missed” in a nutshell, since I don’t want you to waste much more of your time this week.

There were at least two debaters on that stage last night that shouldn’t have been there: Maxime Bernier and Yves-François Blanchet. The former because he is a fearmonger who espouses xenophobic policies and broke off from the Conservative Party because he thinks Andrew Scheer is a Liberal – perhaps the least disturbing of his misconceptions – and the latter because his entire mandate is to pursue the interests of one province. You may argue that they have met the requirements of inclusion through holding seats in Parliament, but by that argument, why not just invite every MP from the House of Commons on to the stage to yell at the same time? It would be just as unintelligible – but at least then it might have some of the intrigue of a Game of Thrones battle scene.

I applauded the move of an unprecedented all-female journalist lineup of debate moderators. But that was before I knew they would all be moderating the same debate! With all due respect to each, none of them had a chance to take control of the debate since their limited time segments essentially allowed them to pose one question and then tell each participant when their time was up (which usually occurred just before each leader seemed poised to maybe make an actual point). Then, just when people were getting used to one moderator’s voice, she would disappear without so much as a goodbye and the next moderator would begin her section, thus resetting the debate to a confusing new beginning. When the first switch took place, from Lisa LaFlamme to Althia Raj, I honestly spent the first two minutes wondering what had happened to Ms. LaFlamme. Did she fall through a trap door? Did she just realize she had to anchor the CTV News broadcast and bolt out? If you’re going to have multiple moderators for one debate – which we should all now realize you should not – at least make the transitions interesting. Perhaps a baton hand-off like a relay team. Or firing tennis balls into the crowd like Bianca Andreescu. Or a puff of ninja smoke. Something!

I don’t know whose idea it was to place one-third of the live audience on the stage behind the moderators, and the other two-thirds behind the party leaders’ backs, but it was a very, very bad idea. The end result: An awkward staring contest between the “stage people” and the “behind-the-back people,” with each one wondering who would blink first and what the hell was happening. They had also been specifically instructed not to make any noise or, apparently, show any signs of life. Frankly, it would have been a more lively environment if it took place in front of some of the museum exhibits. At the beginning of the evening, an audience member nervously asked the first question of the night. And why not: If you’ve hired five different veteran journalist moderators for the same debate, you should, by all means, go to an anxious audience member to get things started. He’s seated on the stage anyway. Might as well use him.

It’s always difficult to determine exactly what questions to ask of leaders. Apparently 8,000 questions were submitted by Canadians, which were then divided into five categories. Yet none of the ones selected really touched on foreign policy, and the section on Indigenous issues was quickly hijacked, becoming exclusively about pipelines – a further indignity to the issues. Meanwhile, the best question of the night, about the climate crisis, came from a man who was watching from the Halifax library. Which begs the question: If you’re going to go to everyday Canadians for questions anyway, why have any moderators at all?

Overall, as soon as this format was announced, I knew it was going to be a challenge for all involved. But credit where credit is due: The organizers outdid themselves. With too much of every element, it somehow achieved not enough of the one thing debate viewers are looking for: a clear idea of the grasp of issues of each leader. A ridiculous idea on paper was turned even more ridiculous by its execution. Now, it’s firmly entrenched in the Canadian history museum, of which some of those “live audience” members may in fact now be a permanent exhibit.