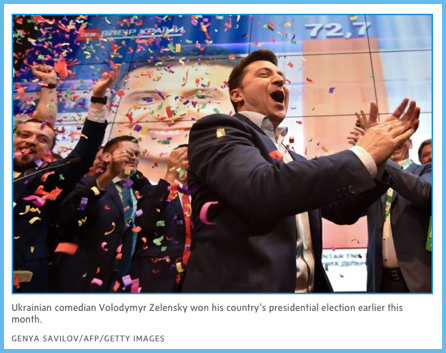 Printed and online in the Globe and Mail on Saturday, April 27, 2019

It’s been less than a week since Ukraine elected Volodymyr Zelensky, a comedian who had been pretending to be the President on TV, to be their actual president. The event has political scientists scratching their heads, journalists asking how this could have happened, and at least one Canadian (me) wondering: Is running for top political jobs the next logical step for comedians now?

Most reasonable people would say no. But then, we don’t live in reasonable times, comedians are not always “reasonable” people, and I am a comedian. The idea of comedian leaders might not be as laughable as you might think.

After all, the phrase “it’s funny because it’s true” is … well, true. Every successful comedian has an element of truth in his or her comedy. (Yes, of course, her: Indeed, if a female comedian became president of the United States, many male senators’ heads would explode on reflex, which might be reason enough for many to vote for Ellen DeGeneres.) So when Icelandic comedian Jon Gnarr ran for mayor of Reykjavik in 2010 and created his own party, The Best Party, it began as a joke. Then people realized that a new party might in fact be the best option, and Mr. Gnarr’s sincerity and honesty – unprecedented qualities in politics – were rewarded with the mayor’s seat in Iceland’s biggest (only?) city from 2010 to 2014. He oversaw serious matters such as a major restructuring of banks and public-sector cutbacks during his time in office. Plus, given who was leading my home city of Toronto during that time, I can definitively tell you that Mr. Gnarr wasn’t even the weirdest mayor among his contemporaries.

When it’s debate time – political showtime, effectively – comedians enjoy a big advantage, too. As someone who has moderated more than 400 debates with many of Canada’s sharpest comedic minds, I can tell you that comedians provide far more entertaining debates than politicians – not just funnier, but in many cases more factual. This in and of itself is not necessarily a prerequisite of a world leader, but it can certainly help put a candidate over the top. Plus, it’s nice if your chosen leader is capable of some well-constructed witticisms instead of being a bumbling idiot.

Case in point: When Mr. Zelensky debated Ukraine’s incumbent president Petro Poroshenko, he was accused of being an “unworthy opponent.” He fired back: “I am not your opponent! I am your verdict!” Strong line, with an element of truth in it, too. Plus, it probably sounds funnier in Ukrainian.

That skill stems from the fact that a comedian’s success relies on his or her ability to read a room. In comedy, that might mean calling out a heckler in an audience, or gaining the support of the largest man in a group of large men during a show in a Northern Alberta bar (not a hypothetical scenario). In politics, it means getting the most people on your side you possibly can and being able to sense and prioritize the needs and wants of constituents.

To win the presidency in Guatemala, TV comedian Jimmy Morales “read the room” of his country and campaigned on the slogan “neither corrupt nor a thief” (because sometimes you don’t have to aim very high). The room told him that it turns out, all his country was looking for was a non-corrupt, non-thief. Since then, though, he’s been widely protested against for his connection to corruption allegations; both his brother and son have been arrested on fraud charges, he’s been condemned internationally for kicking a UN anti-corruption task force out of his country, and he’s been openly called “The Donald Trump of Guatemala.” So perhaps he has lost touch with the core talent that got him to the country’s highest office. Or perhaps Guatemala is just a tough room.

He also may have lost something of his anti-establishment streak, another inherent quality of so many comedians. After all, an actual alternative for something broken shouldn’t come from inside that same thing. So bringing in a business billionaire to fix the problem of corrupt governments taking bribes from business billionaires is, frankly, moronic: It’s like replacing a Ukrainian doll with a slightly smaller but otherwise identical doll that was nested in it, all along. Comedians, on the other hand, are an alternative not only to the political establishment, but also to the business establishment, the arts establishment, and basically any other established establishment. We are essentially outsiders with keen insights, and we’re okay with that. So the moment a comedian declares a desire to become a politician, is the moment he or she ceases to really be a comedian in the eyes of most comedians.

That might be why I don’t know of many comics who are interested in becoming a part of the political process. Much of a comedian’s job is mocking that very process and saying what the general public is really thinking, but in a much more colourful way. It’s a shame, really: With so many politicians being international laughing stocks these days, it would be a refreshing change if that were at least on purpose.